“This is not how my dad taught me to frame a house!”

Then again, dad heated with oil at 25 cents a gallon.

The use of Structural Insulated Panels (SIP) is on the rise but it is still fairly uncommon. So why was this type of construction chosen for TerraHaus?

Short answer? To avoid thermal bridging—conductive materials that allow heat to bypass insulation. In standard construction, wood in the form of studs, top plates, headers, etc. rather than insulation may make up over 10% of a wall, and wood is not a very good insulator.

Structural Insulated Panels (SIPs) are one of the key pieces of technology that makes it possible for TerraHaus to achieve its remarkably low space heating fuel requirement, the equivalent of under 80 gallons of fuel oil or ½ cord of wood for 2000 square feet per heating season, less than 10% of the fuel used in a standard code-compliant home constructed in our area.

SIPs are sandwiches of oriented-strand board (OSB) sheathing and some type of foam core insulation. TerraHaus uses a relatively new foam insulation, graphite-coated expanded polystyrene (EPS) by Neopor.  EPS was chosen for its low global warming and ozone potential (see previous blog post). The graphite coating is an innovation that creates a radiant barrier which boosts the R-value of our 8.25-inch panels from R-33 to R-36. After cellulose is added to our cavities, we’ll have an R-value of 50.

A SIP is strong enough to be used as a load bearing wall but it is often used over timberframe or stick built construction. TerraHaus is framed with 2 x 4s and, around the south windows, some heavy posts. This framing creates a chase for electric utilities, provides vertical strength to support the second floor and roof, and will be filled with cellulose insulation to add to the total wall insulation.

Again, a thermal bridge is a gap in the insulation that forms the thermal envelope of the house. The problem with standard framing is that wood has an R value of only about 1.4 per inch. In standard 2 x 4 construction this means that every 16” on center you have a thermal bridge of 1 ½” (the actual width of 2” nominal lumber) where heat can bypass the insulation and conduct through the wood rapidly. The real R value of a wall ends up being only 80% or so of the R value of your cavity insulation.

SIPs construction on TerraHaus forms a continuous barrier without thermal bridging from studs. In addition, the seams are minimized because, unlike 4 x 8 sheating, the OSB-covered SIPS are up to 8 feet wide and they run the entire height of the wall. The window and door openings are precision cut at the factory based on the architect’s specifications. After installation, each seam is filled with spray foam and sealed with tape.

Detail of Window Cut Out in SIP

Can you minimize thermal bridging in standard framing? Yes. Many green builders have switched to Advanced Framing. Advanced framing is too complex to go into in detail in this post, but I’ll mention the highlights: 2 x 6 construction 24-inches on center (rather than 2 x 4s at 16 inches), two-stud corners (rather than three), rigid insulation included in the center of headers, minimization of unnecessary cripples and jacks, and single top plates. These changes necessitate some other modifications such as metal bracing and drywall clips on corners, rafters or trusses set directly over studs, and  5/8” drywall rather than ½“. As architect Matt O’Malia points out though, Advanced Framing still results in serious thermal bridging. Rigid insulation on the outside of the sheathing can help, especially when installed over new types of sheathing that can be taped for air sealing.

Not all Insulation Choices are Created Equal…

…if you care about climate change.

Building insulation reduces greenhouse gas (GHG) emissions associated with space heating and therefore has long been a strategy in climate change mitigation. Unity College students learn about life cycle analysis in their Environmental Sustainability course so they and other environmentally-literate citizens know that there is some GHG cost in the production and eventual disposal of insulation that will subtract from these savings.

As it turns out, the GHG emissions from insulation are much higher for some forms of insulation than most of us have probably assumed, and the differences in global warming potential (GWP) for different insulation choices is huge. Environmental Building News (June 2010, Volume 19, No. 6) documents the findings of several researchers on this issue.

The foundation insulation and the SIPs panels of TerraHaus will use variations on one common form of insulation known as expanded polystyrene (EPS), also known as “beadboard.” EPS was chosen because the typical GHG “payback period” (the fuel oil energy savings needed to offset its manufacture) is about 4 years for R-50, the insulation value of the TerraHaus walls. Compare this to other common forms of insulation:

*I wrote to Dow about their blue board which historically has had the same payback as Corning’s pink board. I got a detailed and clear answer about the new ozone-friendly blowing agent that they have switched to using, but the answer with regard to the GWP of its blowing agent was much less transparent. I’m still not sure where their product stands. Yes, the energy used in manufacturing the product is quickly paid back in space heating savings, but what about the potency of the blowing agent as a GHG?

These estimates were modeled for Boston. In warmer climates, the payback will obviously be longer.

The problem with XPS and closed cell spray foam (high density spray foam) is in the blowing agents used to expand the products to size. These blowing agents are gases with many times (1000 to 1500 times) the potency of carbon dioxide as greenhouse gases. The estimates used in the studies assume that 50% of the blowing agents will escape over time. Others feel that this estimate is too conservative.

Should we avoid closed cell spray foam completely? Note that the above analysis looks only at the conductive heat loss values. In other places in this blog I have emphasized that both insulation for conductive losses and air sealing for convective losses are important. The GWP in this analysis is probably too hard on spray foam, as spray foam can be used effectively for air sealing; if air sealing was taken into account, spray foam should pay back in less than 80 years. Also, the whole insulation and sealing system should be analyzed because combinations of insulation choices are often used. Spray foam for air sealing should be used in combination with a blower door to find invisible missed spots because spray foam doesn’t air seal quite as well as its users usually assume.

One lesson from this article: if you are concerned about climate change, make sure your architect and builder are green building experts who follow journals such as Building and Environment, Environmental Building News, and Building Science.

The TerraHaus design calls for an insulated slab foundation called a frost-protected shallow foundation (FPSF). Standard foundations use a frost wall that extends below the frost line, about four feet below grade. The idea is to prevent frost heaving which would damage the structure. The floor is then poured near the base for a basement design or the space is filled with gravel and poured at the top of the frost wall if the poured floor is to form the bottom floor of the building.

The FPSF uses insulation below and extending a couple feet out from the foundation to prevent frost formation under the building. This not only prevents frost heaves, but it also insulates the floor. Four feet of soil has an R value of about 1, so 6” of foam insulation can easily take care of the frost issue while keeping the floor toasty.

Two basic designs can be used for FPSFs: the Monolithic Slab (also known as the “Thickened Perimeter Slab”) and the Perimeter Grade Beam used for the TerraHaus. The monolithic slab, formed in one pour, has a 16-inch deep x 12-inch wide thickened slab edge poured over and a foot beyond tapered gravel edges. The perimeter grade beam uses insulated concrete forms for the thickened perimeter. Both use a five-inch slab on top of compacted gravel fill.

The diagram below shows a monolithic slab detail, and the two photos show the TerraHaus Perimeter Grade Beam in progress. 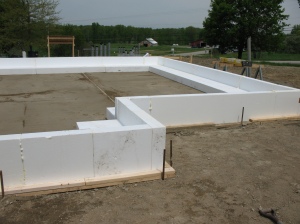 Due to the ease of installation and the reduced excavation and concrete costs, a FPSF may save $1500, $3000 or up to $20,000 over a standard full foundation in a residential setting. A standard carpentry crew can do most of the work rather than relying on foundation specialists. Builders like avoiding the deep trench adjacent to the frost wall that they constantly have to bridge over. In many cases, the result is a more thoroughly insulated foundation and floor.

FPSFs are recognized by the American Society of Civil Engineers (ASCE), the International Building Code, the National Association of Home Builders (NAHB), and the Council of American Building Officials (CABO). NAHB has been enthusiastically promoting the FPSF since about 1995.